Inside the Global Information War

Why are tech leaders, lawmakers, and digital combatants, including “professional state-employed cyberwarriors and seasoned amateur guerillas,” fighting different digital wars? On Ribbonfarm, Renée DiResta offers a fascinating look at evolving misinformation conflicts and the ineffectiveness of what she terms the “digital Maginot Line.” A particularly salient passage on engagement asymmetry at the base of this “warm war”:

Regular civilian users view these platforms as ordinary extensions of physical public and social spaces – the new public square, with a bit of a pollution problem. Academic leaders and technologists wonder if faster fact checking might solve the problem, and attempt to engage in good-faith debate about whether moderation is censorship. There’s a fundamental disconnect here, driven by underestimation and misinterpretation. The combatants see this as a Hobbesian information war of all against all and a tactical arms race; the other side sees it as a peacetime civil governance problem.

Next month, G100 will hold its annual Silicon Valley meeting, where members connect with top tech leaders and explore topics including privacy, security, innovation and more.

Defining the Costs of CEO Activism

What is the price of taking a stand on social policy as a public company CEO? How do boards engage CEOs in conversation about activism and distinctions between personal and corporate positions? Stanford’s Rock Center for Corporate Governance, in concert with Stephen Miles, CEO of our sister firm TMG, explores the implications and complexities of CEO activism and advocacy. From their report:

Few CEOs have taken as vocal and bold a stance on policy issues as Ed Stack, Chairman and CEO of Dick’s Sporting Goods. One of the US’s largest gun retailers, Dick’s announced earlier this year that they were enacting a ban on sales of assault-style weapons , as well as limit gun and ammunition sales to customers under 21. The company continues to explore ways to tie this advocacy to business strategy:

In recent months, Dick’s took guns out of 10 stores completely, a test the company is likely to expand, said Mr. Stack. Using the space for higher-margin and faster-selling items has boosted sales in those stores, he said. “Since we made the decision, we’ve raised our guidance three times.”

An unconventional – and perhaps even unpopular – argument for a Silicon Valley entrepreneur to make: scientific progress is stagnating, and even major leaps in AI and CRISPR are not clearly more significant than scientific breakthroughs made nearly a century ago. Stripe CEO Patrick Collison, along with Y Combinator Research Fellow Michael Nielsen, lays out the case behind this slowdown in the sciences and why larger scientific teams, with more expertise and better funding, deliver smaller economic returns than their predecessors:

Ahead in the Cloud

$27B in revenues, 46% year over year growth, 1,800 new services and features added in the last year – Amazon Web Services’ growth story reads like a fever dream amid signs of slowing global growth. Intelligencer gave AWS CEO Andy Jassy the stage to share his own take on how Jeff Bezos decided to bet on IaaS, the innovator’s mindset, and Amazon’s approach to building teams. An excerpt:

We ask the following questions of ourselves: If we’re successful, can it be big? Do we have a differentiated approach to the space? Is it being well-served today? And do we have some competencies that would allow us to be knowledgeable in this area?” If we like all the answers to those questions, then we assign a single team to work on it, one that’s not encumbered with having to run any other part of the business. Otherwise, if you encumber an already busy team with a new initiative, the new initiative will always lose out time-wise and priority-wise.

G100 Talent Consortium will head to Seattle in February for a workshop with Amazon executives.

At last month’s G100 meeting, we explored the future of mobility in cities, with a focus on autonomous vehicles. On the heels of that discussion, Ford showed off updates to its driverless ridesharing test in Miami, which one reporter called “a marvel” and “one of the most complex environments I’ve ever seen an AV navigate”. The Verge provides a rundown of the ride and where Ford is going next:

What Ford really was interested in showcasing: its business model. Ride-hailing, fleet management, deliveries, and digital content — all the pieces Ford says will make its $4 billion bet on autonomous vehicles pay off and will send it rocketing past its supposed superior rivals. Today, ride-hailing costs around $2.50 per mile. Sherif Marakby, president and CEO of Ford Autonomous Vehicle LLC, estimated that the company’s autonomous vehicles could drive that price down to $1 per mile.

The fastest-growing component of the mobility discussion, however, may not be AVs but micromobility solutions, including electric scooters, e-rickshaws, and bicycles. Noted tech and transportation analyst Horace Dediu is one to follow on this topic. He frequently shares data on the transformation of last mile transportation, including this fascinating graphic that shows how Lime and Bird, two leading scootershare platforms, are growing faster than Uber, Lyft and even the iPhone did at their introductions: 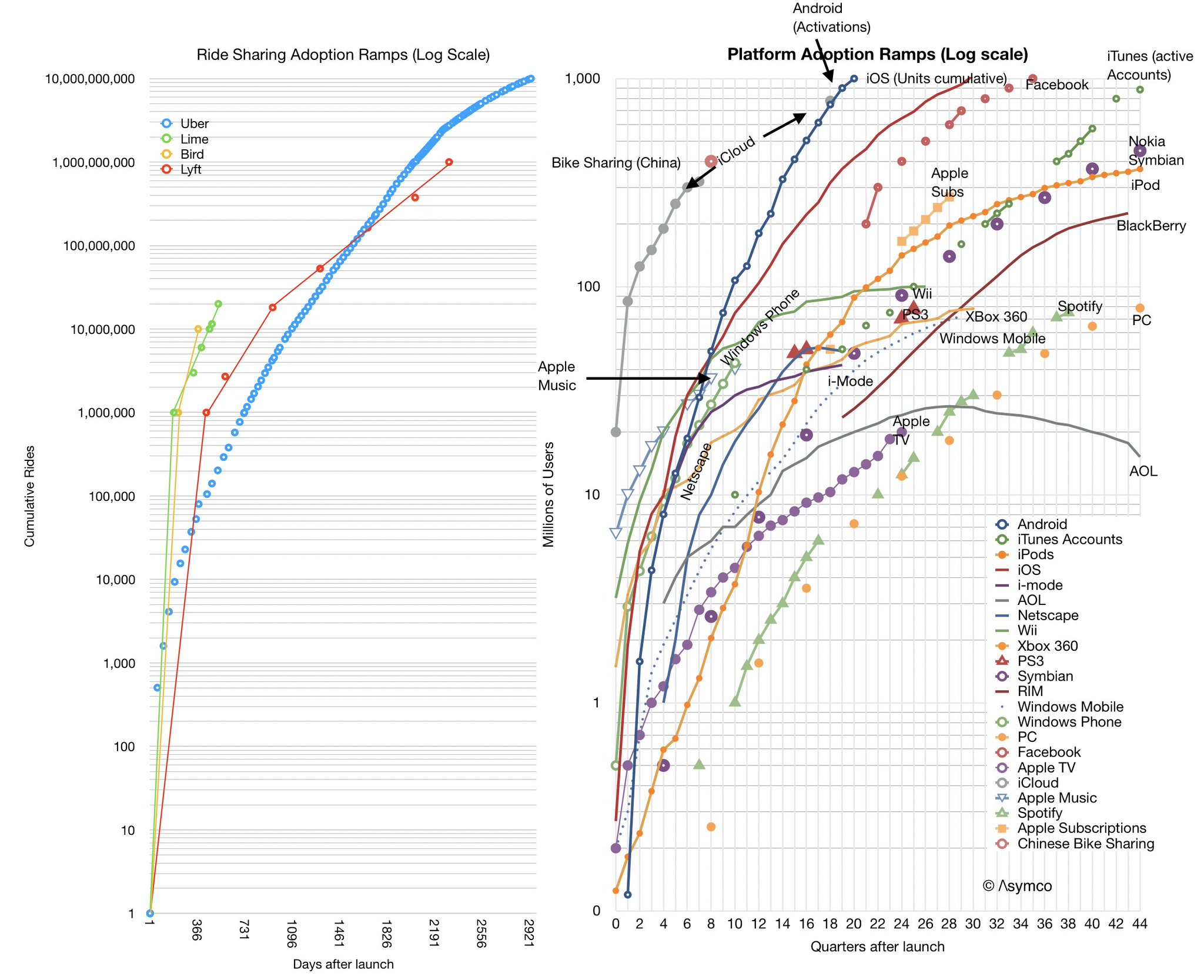 When AI Is the Product

Look to China, where a new class of apps is leading the field on mainstream consumer AI in surprising formats. Andreessen Horowitz general partner Connie Chan goes deep on how three companies, including the makers of the hugely popular mobile video app TikTok, use AI to foster trust through anonymity, ensure accessibility, and otherwise redefine the problems that AI can solve for consumers:

TikTok is fully reliant on AI, and that makes all the difference. Rather than asking users to tap into a video thumbnail or click into a channel, the app’s AI algorithms decide which videos to show users. This is possible due to TikTok’s clear signals from each video: The full-screen design of TikTok means that every video can unveil both positive and negative signals (positive = a like, follow, or watching until the end; negative = swipe away, press down). Even the speed at which users swipe a video away is a relevant signal.